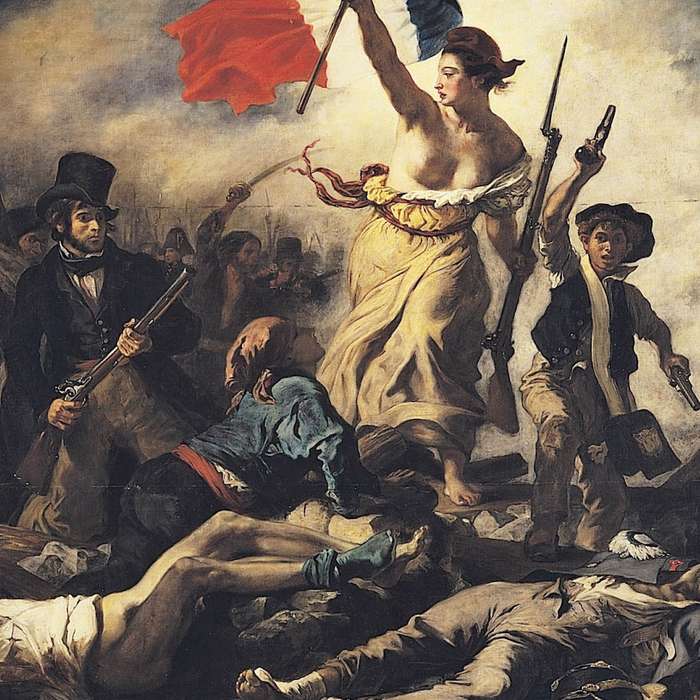 « This retrospective marked the history of the Louvre. It has become the most visited exhibition in the world's most frequented museum!  »

Delacroix and the Louvre, a love story shared with thousands of people. It was 2018, and it was the exhibition not to be missed in Paris. That year, the Louvre organized a historical retrospective on Eugène Delacroix (1798-1863), an exceptional painter of French art. The first comprehensive exhibition on the painter since 1963, it welcomed 5,100 visitors a day, attracting a total of nearly 540,000 visitors to Paris. The success was repeated at the Metropolitan Museum of Art in New York, co-producer of the exhibition, where it moved after Paris. This was the first retrospective ever devoted to Delacroix in America. But why such a craze for Delacroix? Because the painter left a mythical iconography of the Revolution and in particular of the Three Glorious Revolutions of July 27, 28 and 29, 1830, monumental paintings with classical motifs, but also a romantic master's image that had been frozen since 1855. Delacroix is much more than that and the exhibition produced by the Louvre has proved it. 180 works brought together, enriched by the artist's writings, have enabled visitors to discover the painter's production in a "global vision" claimed by Sébastien Allard, curator of the exhibition. As a true tribute, he offers a synthetic and renewed vision, questioning what inspired the artist. Mythology, literature, the Orient and contemporary history have thus given shape to these heightened feelings. It was a unique opportunity to see all of his masterpieces gathered around the emblematic Liberty guiding the people, and most of the artist's major works preserved in French museums, including magnificent large formats such as the Furious Medea of Lille, and exceptional loans from the United States, Great Britain, Germany, Canada, Belgium, etc. In short, the result of a large-scale museum cooperation. Born into a bourgeois family, Delacroix was eager for success. As early as 1822, he presented his paintings at the Salon and his masterpieces were produced early in his career: Scenes from the Massacres of Scio (1824), The Death of Sardanapale (1827) and, of course, Freedom Guiding the People (1830). However, the political subject was soon abandoned in favour of various genres: portraits of animals, orientalism, religious dolorism... Delacroix was in constant research, so much so that he was able to paint at the same time huge bouquets of flowers emblematic of decorative art and religious paintings inspired by the old masters. If we remember especially his monumental painting, the exhibition at the Louvre has shown that there was a real articulation between his large decors and his easel painting, which respond to each other and allow the same motif to unfold. Delacroix is a genius of colour and matter. His very sensual painting privileges the bodies, the experience of the flesh and, through this, the emotions. Thus, returning to his iconic status, the Louvre retrospective showed that there was much more to be understood in Delacroix's work, rich in motifs and pictorial research.

Don't wait any longer! Download Pablo to discover Eugène Delacroix (1798-1863), book your tickets directly in the app to not miss anything of the exhibitions news!