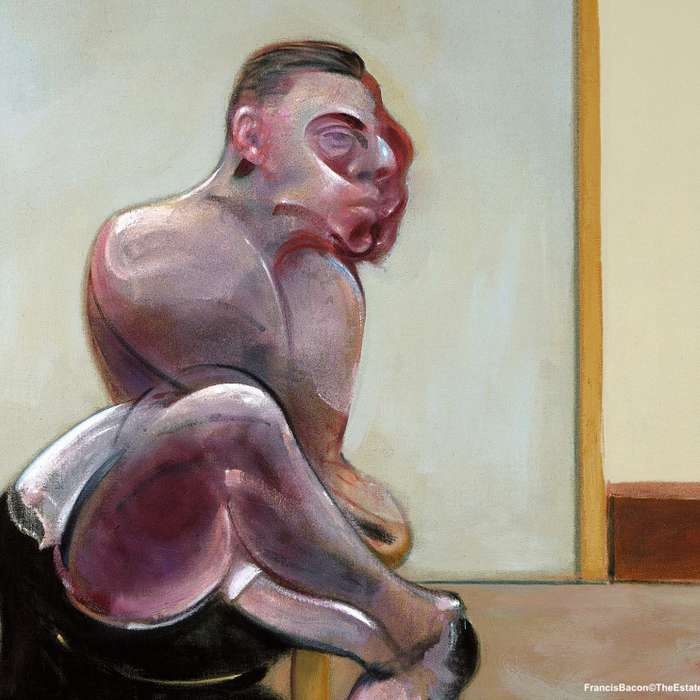 Francis Bacon is back in Pompidou, twenty years after his last exhibition at the Centre. This time, the museum explores in a new way the influence of literature on Francis Bacon's painting, and brings together paintings from 1971 - the year of the retrospective devoted to him by the Grand Palais' national galleries - to his last works in 1992. Francis Bacon claimed that literature was a powerful stimulus to his imagination. The stories inspired a "general atmosphere", "images" that emerge, as do the "Furies" in his paintings. As you walk through the exhibition halls, you can easily imagine the artist's incredible bio-library, made up of more than a thousand books. He, who had not had a teacher, read a lot. And not just any author. The greatest names of the littetarutre are to be found there, including Aeschylus, Nietzsche, Georges Bataille, Michel Leiris, Joseph Conrad and T. S. Eliot. The latter are his favourite authors who have greatly influenced the artist as shown by the paintings presented in the exhibition. Nietzsche was one of his masters of thought, especially because he shared with him his mistrust of any kind of value or belief. With the other authors, he shares the same realistic, a-moralist vision of the world, a conception of art and its forms freed from the preconceptions of idealism. The interactions between his production and literature are explored through sixty paintings (including 12 triptychs, as well as a series of portraits and self-portraits), from the most important private and public collections. You will discover works largely influenced by classical art, violent and heartbreaking works, crushing the human figure, which he paints exclusively, without ever seeking abstraction. The year 1971 was a turning point for Bacon. The exhibition presented at the Grand Palais is an international tribute to him. The tragic death of his companion, a few days before the opening, opened a period marked by guilt that took the symbolic and mythological form of the Erinyes (the Furies) who were called upon to proliferate in his painting. The three so-called "black" triptychs painted in memory of his late friend (In Memory of George Dyer, 1971, Triptych-August 1972 and Triptych, May-June 1973, all present in the exhibition) commemorate this death.

Want to know
more about Francis Bacon : books and paintings?

Don't wait any longer! Download Pablo to discover Francis Bacon : books and paintings, book your tickets directly in the app to not miss anything of the exhibitions news!