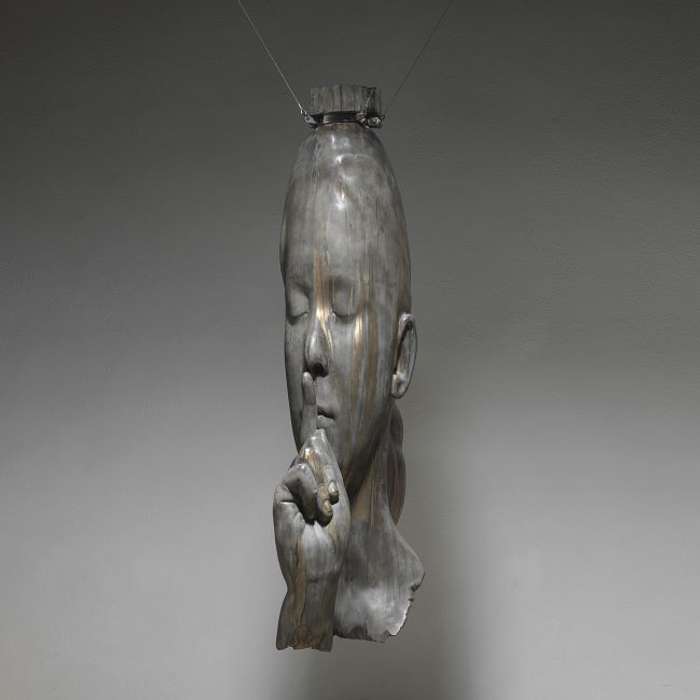 Jaume Plensa returns to Paris for our greatest pleasure! You may not know his name, but you may know his works. Remember these large stainless steel figures 6m high, Place Vendôme or its monumental faces displayed in the open air in Bordeaux. A nomadic artist, Plensa presents these new creations at Galerie Lelong. In recent years, he has developed in an ever more spectacular way his favourite theme, that of the representation of the diversity of the human figure and the languages that bind people together. For this new exhibition, he imagined a silent conversation. Jaume Plensa has conceived this new exhibition as a silent conversation. In the first part of the gallery, three heads of young girls, some three metres high, stand on the floor. Originally carved from tree trunks then cast in bronze, the elongation of the faces is much more pronounced than in other of the artist’s works, visible in places such as the Perez Museum, Miami, the Seattle Museum, the city of Bordeaux and elsewhere. The anamorphosis is captivating. Opposite these three figures, who have their eyes closed, in the other part of the gallery, a portrait of a young girl, also cast in bronze, is positioned in the centre of the room. It is suspended from the ceiling, and a hand, placed in front of the mouth, the index finger raised, invites silence. These four sculptures bear the names of the young girls of whom they are the portrait (Julia, Laura, Wilsis, Minna) but the facial features have been so elongated as to become unrecognisable, thus taking on a universal dimension.

Don't wait any longer! Download Pablo to discover Jaume Plensa, book your tickets directly in the app to not miss anything of the exhibitions news!