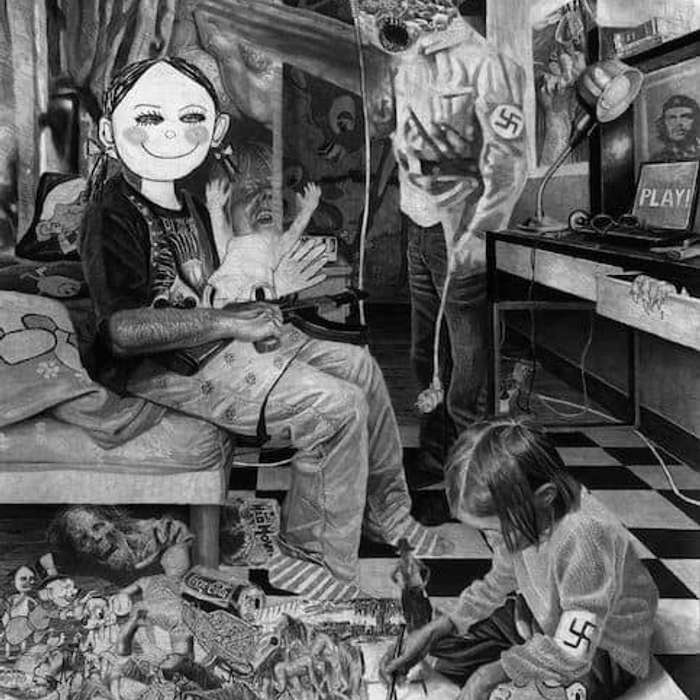 « More than an exhibition, a rare and breathtaking experience!  »

A teenager, still in short pants, makes the Nazi salute in a childish landscape. A young girl about to slit a boy's throat, perhaps his brother. Monumental insect heads as if ready to devour you. This is the art of Jerome Zonder. An art that challenges, an art that disturbs. In 2015, Fatum is the artist's first monographic exhibition in Paris. Presented at the Maison rouge, it is conceived as a spatial and mental journey through Zonder's work. It is not an exhibition that the artist invites to visit. It is a graphic experience. A vast drawing in charcoal, graphite, ink and acrylic is spread out on the walls and floors, and a selection of works produced over the last ten years is integrated into the whole. This labyrinthine journey reveals the scope of an exhibition that abolishes its limits: Fatum is an injunction to go through a drawing and to penetrate the narratives proposed by Jérôme Zonder. Rarely has the memory of such an exhibition remained in the collective memory. As soon as they entered the exhibition, each visitor felt both literally taken in and invaded at the same time. Drawing was everywhere. On the walls, which the artist had completely covered by tapping the graphite with his fingers. On the floor, on the ceiling, everything was now a graphic labyrinth on the walls of which hung works of art that increased your heart rate. For Fatum was not a bucolic stroll. It plunged us into the harshness of childhood, which was accentuated by the "black and white" side of the medium. In 2009, the artist perceives a rise in violence and dedicates a series to the children of the century, then aged 9. He personifies them in three characters: Garance, Baptiste and Pierre-François who grow up over the works and the years. His character of Garance is inspired by the photographer, curator and feminist activist, member of the FEMEN, Julia Javel. In the stories in which they are embodied, the presumed innocence of childhood gives way to a real sexual and morbid brutality. The images of childhood merge with Sade's fantasies of horror films, but also of the Shoah explicitly rendered in the 2014 Grey Flesh series. By intertwining the small and the big story, Zonder articulates "the violence we inherit and the violence of the world in the present". His work is based on reflections on the past and the present, which he confronts with the way the material is placed on paper, with little resistance to the new intuitions that this creative gesture could bring. Between hyperrealism and childish drawing, the organic line gives the impression of penetrating an inner narrative, leaving no room for the viewer. Zonder narrows his obsessions and pushes others aside. Trained at the Ecole Nationale Supérieure des Beaux-Arts in Paris, Jérôme Zonder is one of those artists who have forcefully rehabilitated drawing in contemporary art. He draws only in black and white, in pencil, charcoal or with his fingers, generally on large formats. The Antoine de Galbert Foundation, known as the Maison Rouge, has since closed. This is a pity, because it was one of the rare places in Paris where exhibitions provided emotions that are still intact.

Don't wait any longer! Download Pablo to discover Jérôme Zonder Fatum, book your tickets directly in the app to not miss anything of the exhibitions news!