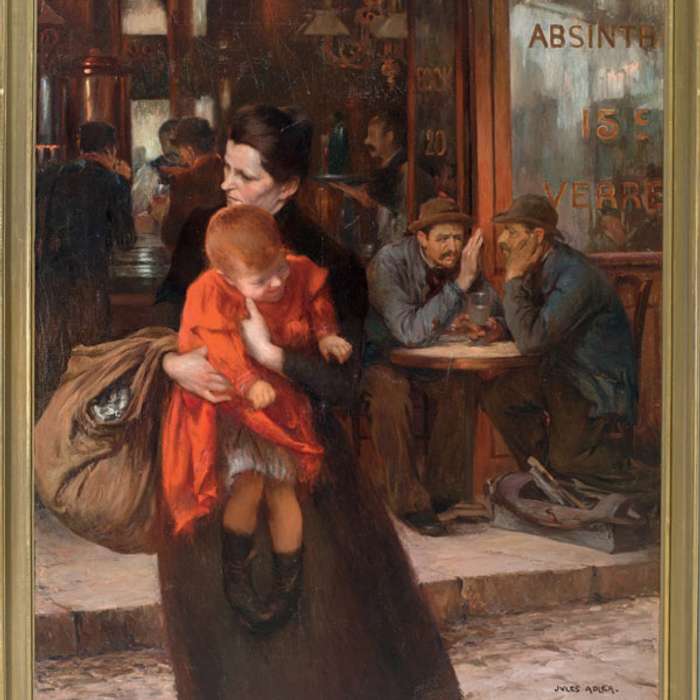 Jules Adler, painter of the people

« An ambitious exhibition of fine arts, and a humanist look at an era. »

Who knows the painter Jules Adler? Apart from the nineteen nineteenth-century artists who will be happy to rediscover the singular work of this Franche-Comté painter, born into a family of Alsatian Jewish origin, it is likely that the general public does not even know one of his works. This is the paradox of this artist whose painting, "La Grève au Creusot" (1899), has become an icon of workers' struggles reproduced in many history books. The one who was called the painter of the humble is now presented at the Musée du Judaisme after a tour in Dôle and Roubaix. The exhibition was co-produced by the Musée des beaux-Arts de Dôle, the Piscine de Roubaix, and the Parisian Museum. It is thanks to this triangular co-production, that it is possible to see the work of forgotten artists returning to the picture rails. Thus, through 170 paintings, drawings, engravings and documents - nearly a third of which have never been presented to the public - this retrospective makes it possible to discover an original work and to understand its inclusion in the social and political context of the France of the Third Republic. It also offers the opportunity to address the resonances of its Jewishness in its perception of the world and its commitments as a man and an artist. Dreyfusard, Jules Adler was especially concerned, at the beginning of his career, by the misery and harshness of the triumphant industrial society, taking an interest as much in the working class condition (Les blast furnaces de la Providence, Les Enfourneurs, Au pays de la mine...) as in the small people of the cities, especially that of Paris where he lived (Les Las, La soupe des pauvres...), which earned him the title of "painter of the humble". The subjects of his paintings such as "La Mère" (1899), seem to have come out of Emile Zola's novels, whose commitment he shares with Dreyfus, or Maupassant. Then, especially after the trauma of the Great War, he put himself in reserve, depicted "the humble", the countryside and testified during his internment in 1944 at the hospice on rue Picpus in Paris, of these old and sick Jews awaiting deportation. He thus left one of the strongest works on social struggles and the proletariat at the end of the 19th and beginning of the 20th century.

Want to know
more about Jules Adler, painter of the people?

Don't wait any longer! Download Pablo to discover Jules Adler, painter of the people, book your tickets directly in the app to not miss anything of the exhibitions news!