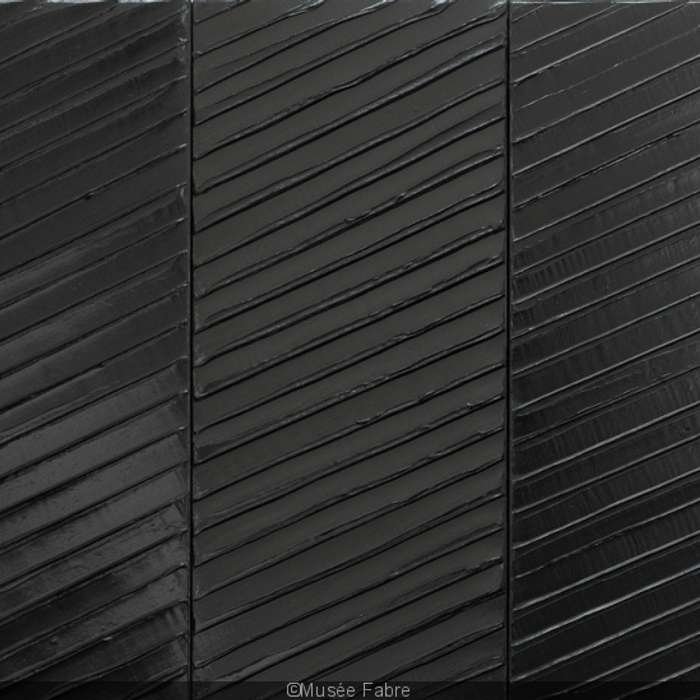 Soulages at the Louvre

« If you have never seen Soulages' "outrenoir" polyptychs, this is the perfect opportunity! »

Exceptional age, exceptional exposure, one might say! An exhibition in the world's largest museum was needed to celebrate the 100th anniversary of Pierre Soulages, "painter of black and light", a French artist and international figure in non-figurative painting. Only Chagall and Picasso, on the occasion of their 90th birthday, benefited before him from such retrospectives at the Louvre. And we can understand that. Pierre Soulages, the black painter, is a monument in his own right. Born on December 24, 1919 in Rodez (Aveyron), Pierre Soulages continues to paint today at a steady pace. His painting is as deep and bright as it is robust. He has made more than 1,700 paintings, more than 230 of which are in 110 museums around the world. The Louvre therefore opened its doors to him in a dialogue imagined by the master in the Salon Carré, located between the Galerie d'Apollon and the Grande Galerie. A place where the Italian primitives are presented, which the painter particularly likes. The works in this Salon illustrate for him the evolution of Western painting, as well as the transition to a representation of three-dimensional space. From the beginning, in the aftermath of the Second World War, Soulages opted for a total abstraction and questioned the traditions of painting. His unique position is embodied by the materials he uses (walnut stain, tar...), by his tools which refer rather to those of building painters, by his choice to identify his paintings by technique, dimensions and date of realization, rather than to orient the vision by a title. For him, painting is a set of forms where the senses that we want to give it are made and undone. The exhibition pays tribute to him with a chronological tour, illustrated by a selection of major paintings, mainly from the greatest French and foreign museums, that punctuate each period, but also allows us to discover very large paintings created in recent months, a sign of the remarkable vitality of this painter.

Want to know
more about Soulages at the Louvre?

Don't wait any longer! Download Pablo to discover Soulages at the Louvre, book your tickets directly in the app to not miss anything of the exhibitions news!