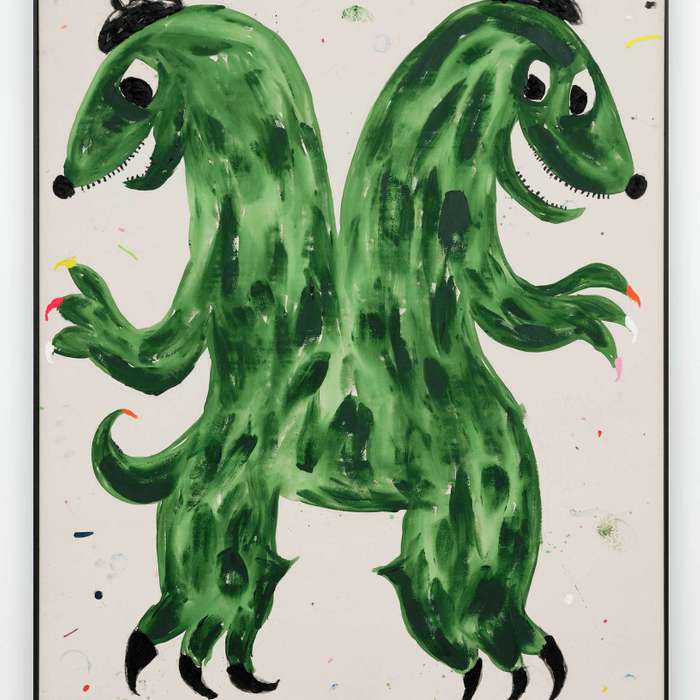 « A quirky exhibition of a Hungarian artist who is little known in France. It's joyful and it feels good!  »

What is art for, what can it do, what is its purpose? These are the kind of idle questions we normally discuss, but the situation from which I am writing these words - in New York, after a little over a week of confinement imposed by the galloping COVID-19 pandemic - they take on a new resonance. In context, Szabolcs Bozó's devilishly original paintings suddenly become an antidote to the anxiety-provoking background noise of everyday life; when what we can expect, or even demand, from art is simply an affirmation of our own vitality, a fiery declaration of perseverance in the midst of absurdity and fear. Bozó's work is so much. It is absurd, clumsy, cheerful, precious, eager to be loved, if not outright cuddled - but also perfectly serious in its pictorial ambitions, in the sense that it translates and elevates the intuitive, almost childlike gesture. I am not surprised that Bozó situates the origin of her inspiration not in academic artistic theories, but rather in her personal experience. In terms of style, he makes a nod to his teenage years, spent perfecting his breakdance technique: "I always liked to see someone perform a particularly difficult figure, and give the impression of doing it effortlessly and simply. "As for why he paints fantastic animals rather than human beings? In the past, Bozó was a bartender in London, and like all service jobs, that meant being exposed to capricious demands and hostile attitudes. It was tempting, in his art, to leave all that behind - to invent a world outside of it, a place where such petty things simply didn't exist. Bozó is part of a young guard of artists who, out of nostalgia or simple freedom, look again at the aesthetics of images drawn by or for children. In this respect, he has obvious sympathies for painters like Brian Belott, Leonhard Hurlzmeier, or perhaps Robert Nava. But while other artists may appropriate certain styles for other purposes - surreptitiously introducing coded political messages or ruminations about everyday violence - Bozó's practice strikes me as purer in a certain sense, without hidden motivations. Ducklings, bears, dinosaurs, and other more or less identified creatures smile, stir and trace their way across the picture. They drive around in strange vehicles or, in some cases, join forces to create completely new modes of transport. What more could one ask for, at the present time, than images of such joyful cooperation? In another series of large-format paintings, which tend to be more monochrome, a swirl of faces and figures are entangled together - a confusion of eyes, noses and smiles. These individual attributes become joyfully inextricable, and it is impossible to distinguish where one begins and the other ends.

Don't wait any longer! Download Pablo to discover Szabolcs Bozó. Big Bang, book your tickets directly in the app to not miss anything of the exhibitions news!